The stories are true, liver nose Rhodesian Ridgebacks are the biggest trouble makers! Jade keeps us guessing as to what antics she is going to-do next. Always under-foot, such a good helper. She keeps Kiya and Lela entertained with her playfulness. What does your dog do when the “cone of shame” comes off…Jade chases her tail!

Oh ok, Jade is still a young Ridgeback she has a lot to learn. So do I. Jade is from a litter that I did my first litter evaluation on. I used the puppy puzzle created by Bob and Pat Hastings. I almost made it out free and clear, but I made the mistake of taking my husband Ed to the evaluation, he fell in love with her. Jade was one of 11 in a very consistent litter.

Jade is by Ch. Freedom’s Fiver Star General by Tigris and out of
Ch. Oakhurst Spirit of Taku.

An up and coming lure courser extraordinaire, Jade ran her first AKC trial summer ’10 and won the first major in Alaska. Lighting fast and on the lure like glue. We can’t wait for next summer!

Jade is sweeping the conformation breed ring quite often. Winning and placing several times in the hound group. Despite her antics she is one hot chick!

Jade has 2 qualifying runs toward her senior coursing title, with two majors toward her field championship.  We’ll keep an eye out for Randi Hirschmann to get pictures for a calendar  possibility.

Jade Retires with 180 points towards her Silver Grand Championship. Undefeated in Alaska 2021~ 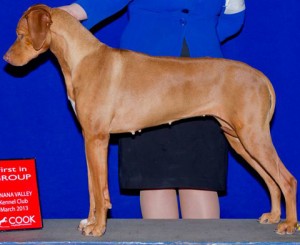